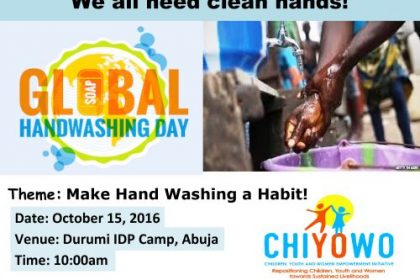 On 15th October 2016, ChiYoWo Empowerment Initiative marked the Global Handwashing Day by repairing and restoring a disused water borehole at the Internally Displaced Persons Camp in Durumi, Abuja, Nigeria. ChiYoWo which is an acronym of Children, Youth and Women focused attention on the importance of water, sanitation and hygiene and the significance of washing hands after going to the toilet, playing outside, farming, selling goods and produce, working and more.

According to Globalhandwashing.org every year, 1.7 billion children do not live to celebrate their 5th birthday because of diarrhea and pneumonia. Three quarters of these children are located in Sub-Saharan Africa and South Asia. This Project was based on the Day’s theme ‘Make Handwashing a Habit’. ChiYoWo empowered mostly women and children on the most effective way to prevent such diseases, by providing them with sustainable water and informing them of the importance of using soap when washing hands.

We are proud to say the host community and most especially over 300 women and 400 children living in Durumi IDP Camp now have access to clean water, which will be used for cooking, bathing, farming and their general well-being. According to the Chairlady of the IDP Camp whom we spoke with 2 weeks later, “every day women and our young girls pray for you when they go to fetch water from the borehole, because water is the most important thing women need in their lives”. 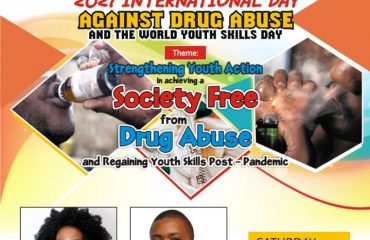 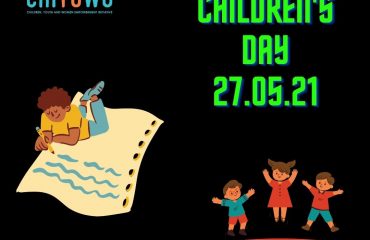