International Day of the Girl Child in Benin, Nigeria 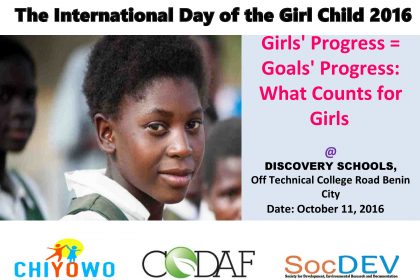 Children, Youth and Women (ChiYoWo) Empowerment Initiative organized a one-day seminar to commemorate the international Day of Girl Child on 11th of October, 2016 at Discovery Schools, Benin City, Nigeria. The theme of this year’s event, “Girls’ Progress = Goals’ Progress: A Global Girl Data Movement, is a call for action for increased investment in collecting and analyzing girl-focused, girl-relevant and sex-disaggregated data, as what gets counted gets done. The Day increases awareness of issues and inequalities faced by girls around the world. To date, many global development plans do not include or consider girls, and their issues and problems become “invisible.”

The seminar helped raise awareness not only of the issues that girls face but also what is likely to happen when those problems are resolved. For instance, educating girls helps reduce the rate of child marriages, disease and helps strengthen the economy by enabling girls have access to higher paying jobs.

Onyeka Titigbe of ChiYoWo Empowerment Initiative and facilitator of the Girl Child event noted the objective of the seminar, was to empower the participants to be better leaders in the society. This was borne from the fact that the rate of girl child abuse, kidnappings and gender based violence in the society caused by culture, hunger and poverty, inadequate government policies and insurgency had been placed on the back burner for too long.

At the event Mrs. Rita Iyke-Uwaka, a forest and biodiversity officer of Environmental Rights Action/Friends of the Earth, Nigeria, emphasized on the need for immediate action to protect the girl child and stressed educating the girl child would help to reduce dependency on others and to a large extent, help lift families out of poverty. In addition, Mr. Cadmus Enade, from the Health of Mother Earth Foundation, urged them to maintain their dignity as girls, while Mrs. Caroline Ubrei Joe stated every girl has the potential of giving birth to a generation, not just a generation but generation of impact. She also spoke on how to achieve their career goals and advised them not to be distracted by irrelevant events.

In closing the event, Chiyowo Empowerment Initiative donated a total of ten (10) copies of Ben Carson’s life changing books “Gifted Hands” and “Think Big” to 10 students who were encouraged to read and learn from the books. 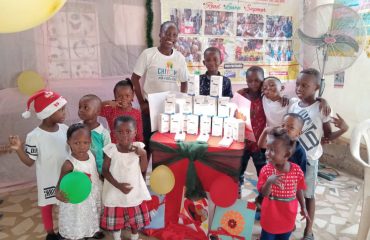 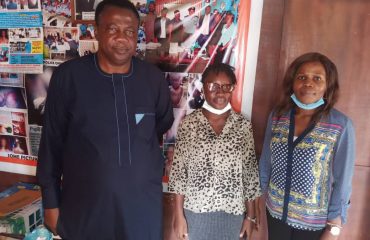