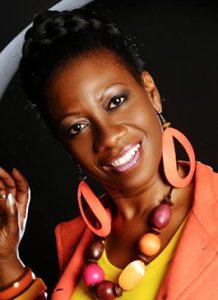 Tokunbo ‘Toks’ Ifaturoti is ChiYoWo Empowerment Initiative’s founder and President. She spearheads its development and progress with the same motivation and enthusiasm she displays in her all of her professional and voluntary capacities. Mrs Ifaturoti infuses those around her with her vision and passion for the possibilities that ChiYoWo holds for the betterment of a large cross-section of Nigeria’s population.

Mrs Ifaturoti’s voluntary contributions are not limited to ChiYoWo as she has offered her services to the Global Poverty Project – London, UK, as Voluntary Campaign Presenter and Ambassador; and to the Lighthouse Children’s Workshop Productions, Limited, London, for which she was both founder and Programme Manager Operational Services.

While the advancement of Nigeria’s disadvantaged citizens is a focus for Mrs Ifaturoti, her concern is much more far reaching. She has contributed to the development discourse of the framework for the Sustainable Development Goals – 17 goals and 169 targets laid out by the United Nations aimed at “Transforming our world” by the year 2030.

Mrs Ifaturoti’s unwavering drive is fuelled by her experiences, involvements and accomplishments to date. She has long been involved in working for the benefit of others and her work has not gone unnoticed. In 2010 she was awarded as the Women in Entertainment Arts’ Best Philanthropic Female for community work.

As an author, she received an ‘Honourable Mention’ at the 2013 Los Angeles Books Festival for her children’s storybook titled ‘The Monkey and the Peanuts’. Earlier, in 2012 her “Evaluation of Woodberry Down Bike Club” in a deprived community, received the nod for Outstanding Research Project.

She has received further recognition of her efforts, with the 2015 and 2014 Women4Africa Award nomination for ‘Humanitarian of the Year’. She was a finalist – one of 6 persons worldwide nominated for their international development work. She is a member of an Internally Displaced Persons Working Group in Abuja, Nigeria set up to carry out Baseline Needs Assessment reseaech in Internally Displaced Camps.

The common threads in her endeavours are child welfare, youth development and health. Mrs Ifaturoti received hands-on training in Direct Marketing, Acquisition and Retention while working with UNICEF, London. Her involvement in outreach and awareness extends well beyond the UK and Nigeria. She has participated in, as well as led programmes dealing with the development and provision of education extension services in South Africa, Zimbabwe and Botswana.

She is currently a contributor to the Observer Trade Foundation and the United Peace Foundation both of London, UK. Mrs Ifaturoti holds two bachelor’s degrees (in Law and International Development with NGO Management); and a master’s degree in Computer and Communication Law. She is also a member of London’s Law Society.

Professionally, Mrs Ifaturoti has wide-ranging experience in the field of law. She gained valuable and transferable insight into the world of e-commerce during the time she spent working at Amazon.co.uk – Berkshire, UK. She has been a consultant and senior solicitor at Nathan Aaron Solicitors, London. Currently, she is the Chief Executive Officer and Principal Consultant of the eponymous TAAI Consultancy Limited (UK and Nigeria).

Mrs Ifaturoti is by no means your run-of-the-mill lawyer but a staunch “advocate for youth development and women empowerment”, the fundamental objectives on which ChiYoWo Empowerment Initiative is based.