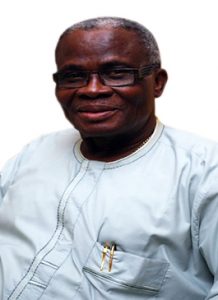 Chief Dr A Tom Adaba is the distinguished patron of the ChiYoWo Empowerment Initiative. His over 40 years of service to the Education and Mass Communications sectors was duly recognized by his country when he was bestowed with the award of Officer of the Order of the Niger (OON) by the Federal Republic of Nigeria in 2008. As chief of his homeland, Ebiraland, he aptly bears the title “Beacon of Light” which is indicative of his guiding presence in his country’s private and public sectors.

His dedication to continued learning and the value of higher education is evidenced by his Bachelor of Science Degree, two Masters Degrees (one in Science and the other in Educational Technology) and his doctorate. An able teacher, Dr Adaba has taught at all levels of the education sector, primary to tertiary and served in the policy making role of President, African Council for Communication Education (ACCE).

He has employed his skills as an educator to his various appointments. Among these is role he played as Associate Professor in Madonna University, Okija Anambra State; Director General of the National Broadcasting Commission (NBC); Lecturer, Ahmadu Bello University Zaria; Principal of the NTA Television College Jos; Station General Manager, Makurdi; and Deputy Director at NTA Headquarters.

He has founded the consultancy firm Trim Communications Nigeria Ltd with the laudable aim of “using communications to unite culture, peoples and business”. This has allowed him to continue making contributions to his country’s communication sector through the recent organization and execution of both a retreat and workshop geared to both government and media representatives.

Dr Adaba’s willingness to form an association with ChiYoWo speaks to his belief that the organization can make a meaningful difference in the lives of those it has pledged to serve. It also underscores his perpetual nurturing involvement in the growth and development of his beloved nation.